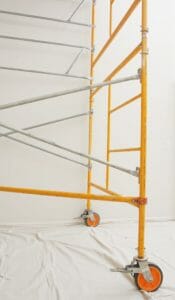 Suspended drop-ceiling removal is a big deal. Make no mistake about it, this will take a whole lot of time and effort. And, that’s just to uninstall the suspended ceiling, not to replace it with something else. However, it’s typically a good idea to get rid of it, since drop ceilings are totally out of style, which makes resale a whole lot easier.

Your first order of business for this remodeling project (as well as any other remodeling or restoration job), is to plan for the debris and material disposal. This stuff will indeed pile up quickly and it’s not something you can simply put out on the curb. The local trash collection agency considers this different from regular household trash. So, you’ll have to make other arrangements for its proper disposal.

Dropped ceilings consist of suspended grids and many removable panels and getting rid of one is a straightforward process. Most dropped ceilings cover unsightly or damaged ceilings or they lower the ceiling height to reduce heating and cooling costs. The panels might also conceal plumbing or wiring. The best way to get rid of a dropped ceiling system is to take it off in the reverse order from which it was installed. —San Francisco Gate

If you’d like to save yourself the time and effort of hauling it away on your own, then just have a local junk removal company come on by and pick it up. Take advantage of the opportunity to unload a bunch of other junk at the same time. This way, you’ll be rid of that stuff and free up much-needed space, to boot.

Okay, so drop or suspended ceilings are usually installed with a hanging frame system. Which means it’s not directly attached to the ceiling at every square inch. But, it will still take some time and effort to get rid of it. Here’s a brief drop ceiling removal guide you can follow: For help with remodeling debris removal, go ahead and phone 800-737-5923 or visit Junk Garbage Removal.