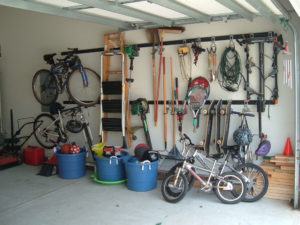 Garage organization tips can really be a great source of inspiration. But, when the garage is busting at the seams and there’s no more room, there’s little choice but to whip it back into shape. The problem is, looking at it is a huge demotivator since it looks overwhelming. Although, it’s not the end of the world because you can reclaim the space with just the right amount of effort.

Before you rush into the work, you should have a plan for what to do with all that stuff. You know, those things you don’t use, don’t need, and don’t want. Sure, you’ve stuffed them into corners and out of the way places. But now, with a garage cleanout in the works, you’ll need a method for getting rid of a whole bunch of stuff. So, you’ll need a strategy in order to stay on track and move forward.

They hold our most dangerous possessions (think saws and hazardous chemicals), our most nostalgic (think yearbooks and old baby clothes), and our most neglected (think moving boxes and broken toys) — yet many of us treat our garage or shed as a dumping ground, rather than a useful storage and organization space. In fact, a quarter of Americans can’t even park their car in their garage because it’s too full of junk, even though usable garages increase a home’s value by 13 percent. —iMove.com

This is why you should call in a junk removal service. They’ll do all the work for you and haul away anything you don’t want. This way, you don’t have to worry about separating out junk from recyclables, and more.

If you still want to go the DIY route, you’ll have your work cut out for you. Here’s how to do a garage cleanout and organize what’s left over to make it neat and functional once again: When it’s time for a garage cleanout, go ahead and phone 800-433-1094 or visit Junk Garbage Removal.