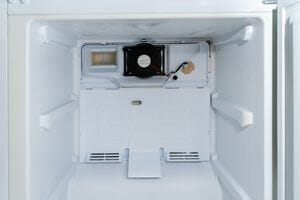 Refrigerator disposal. Such a simple thing to do, right? Wrong. In fact, if you haven’t yet tried to dispose of a major appliance, you’re in for a not so pleasant surprise. It’s actually quite a chore to get rid of any old appliance. And, refrigerator disposal is certainly no exception. But, you probably haven’t given it much thought. However, when it comes time, you’ll quickly learn this is no easy task to pull off. It’s difficult and you do have a few options available to you but it will take a bit of effort on your part. So, read on to learn more about refrigerator disposal.

In fact, if your refrigerator was built before 1995, it was manufactured with a chemical compound that you’ve likely heard about, chlorofluorocarbon, or CFC, which is a refrigerant that is a combination of chlorine, fluorine and carbon. Those gases are quite unhealthy when released into the air. So the longer you keep that old fridge limping along, the more of a health hazard it poses. Refrigerator manufacturers stopped making appliances with CFCs in 2005, and, for good reason.

You’re wasting $65 or more in electricity to run a fridge that’s at the end of its life. Before it breaks and leaves you with a lot of spoiled food on your hands, replace it with an Energy Star qualified fridge or freezer that’s no bigger than you need. They cost only half as much to run and offer advanced technology to keep your food fresher longer. —Energy Star.gov

The typical refrigerator lasts between 10 and 20 years. After that time frame, it might still function, but it won’t do so efficiently and that wastes electricity and food. In fact, an old refrigerator, or, one’s that’s over 15 years of age, will take up as much as 14 percent of your total electric bill. If your fridge is less than 8 years old, then you might opt to repair it. That will certainly be less costly than replacing the appliance, but if that’s not really a viable alternative, you’ll have to replace it.

Here are a few suggestions for getting a refrigerator out of your property without violating the law (illegal dumping). These are a few ways to go about refrigerator disposal: When you need appliance removal and disposal in Mountain View, just phone 408-722-9316 or visit Junk Garbage Removal.