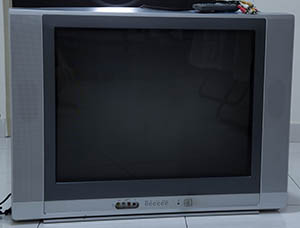 Old projection television disposal. Wow; not exactly the most exciting thing on any to-do list. But, that’s not to say it’s a cinch to pull off. In fact, it’s a bigger challenge than one might imagine. After all, it’s seriously out-of-date technology. Plus, it’s used. Which means there’s not much demand (if any at all) for it. However, this doesn’t mean you’re stuck with it altogether. So, let’s take a look at a few old projection television disposal options you can use.

While there are a few things to do with an old projection TV, darkening the curb certainly isn’t one of them. It’s ugly and won’t serve any purpose if exposed to the weather elements too long. But you simply can’t help wonder why it’s not hauled away with all your other trash. In a word, it’s toxic. There are many hazards materials inside.

A projection TV is a television set that uses a video projector to display its picture. With the projector, the TV is able to cast a much larger image than most standard models, making the TV set into a small-scale cinema screen, which many owners use in their home theaters. A projection TV can be either rear projection, making it function like a standard TV set, or front projection, which works like a movie projector. —Our Everyday Life.com

Hazardous materials mean danger. They also mean quite a bit of hassle to load. And, fees pertain to legally dumping and recycling these electronics. That means you’ve got a problem on your hands.