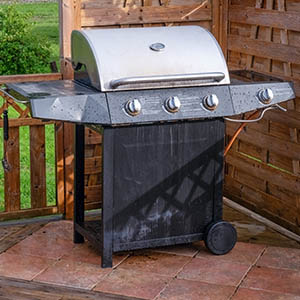 When you need to dispose of an old barbeque grill, you'll quickly learn this isn't an easy task. First of all, it's old. Second, it's used. Third, it's a mess. Fourth, it's potentially dangerous. And, the list goes on and on. However, if it's still in relatively good condition, you might consider repairing and refurbishing it.

Since old BBQ grill disposal is somewhat of a hassle, you should serious think about salvaging it to get a few more years out of it. This is a great option, especially if you like its performance and don't want to incur the cost of replacement. All you need to do is remove the tank, dismantle the grill, and change out the parts.

Disposing of an old or damaged barbecue gas grill is not as simple as merely throwing out the unit. Because of the specific and potentially dangerous nature of typical gas grill components, owners of these barbecue grills can’t simply put the grill out with the normal household trash. Even if you’re trying to be responsible and recycle gas grill parts, certain items, like propane tanks for example, are not suitable for recycling right away like other recyclable materials you may toss. --Do It Yourself.com

Replace the cooking grate with a new one. Also, replace the rock gate and install a new igniter, along with a new burner assembly. Of course, you should add up the cost of replacement parts and then decide if it's worthwhile to refurbish it or replace the grill completely.

If it truly is time for an old BBQ grill disposal, then you just need to offload it. But, don't set it out on the curb. Chances are excellent the local trash collection service won't pick it up because it contains hazardous materials. Or, because the materials need to be recycled. So, here are some old BBQ grill disposal options and alternatives to consider: