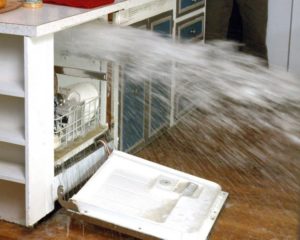 Built-in dishwasher removal. Where do you start? What’s the procedure for getting this thing that’s under the kitchen counter out? There certainly is no question this is a daunting task. After all, it involves plumbing and electrical wiring. But, it’s really not that difficult. You just have to get past the fact it’s “built-in” because that’s a complete misnomer. It just takes a few straightforward steps to get it done.

Of course, you don’t want to jump the gun. There must be a legitimate reason for a built-in dishwasher removal. Otherwise, you can skip the whole thing and just have it repaired. The question now becomes, is it really time for it to go? Well, you should look for some common failing dishwasher signs. For instance, if it goes through a whole cycle but doesn’t clean. Or, water pools around the bottom of the appliance.

Removing an undercounter dishwasher and replacing it will take an experienced installer less than an hour. You probably won’t manage the job that quickly, but it is a relatively simple procedure, especially because the plumbing and electrical hookups are already in place. And by doing the work yourself, you can save the $100 or more a retailer will charge, or step up to a model with more features. —This Old House.com

Those two symptoms are bad news and likely mean you’ll need a replacement built-in dishwasher. Or, if the thing overfills and under-fills with water during operation. Strange sounds are also an indication that it’s dying out. The truth is, in most cases, it’s usually less expensive to replace it than fix it. And, if you do, you’ll get a new appliance, which is a big plus because it will use less water and energy.

Now, when it comes to a built-in dishwasher removal, you’ll only need a few common tools and some supplies. A bucket and towels will come in handy, along with a set of screwdrivers or drill-driver. Here’s how to remove a built-in dishwasher: If you need appliance removal for any property, go ahead and phone 800-433-1094 or visit Pro Junk Dispatch.