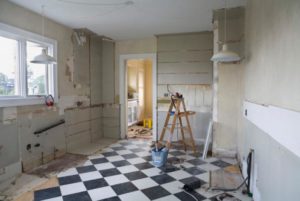 Kitchen soffit removal and disposal isn’t exactly a walk in the park. The truth is, this is very time-consuming and laborious work. Although it is relatively straightforward, it’s definitely not an easy DIY job. Now, the actual tear out isn’t all that complicated. But, what follows after will require some serious carpentry and electrical wiring skills. This is what makes a kitchen soffit removal and disposal a real challenge.

Before you bring in your tools and start ripping things down, you should first plan for the enormous amount of debris you’ll generate. Too often, homeowners and others alike just don’t amply plan for the aftermath. They focus on the finished product. And, it isn’t until they can’t avoid it they must deal with all the material debris.

Making the decision to remove the soffits means that you have committed to a big project. Just how big depends on what is lurking behind the soffits. The only way to tell is to cut a hole in the drywall big enough to shine a flashlight and get a good look around. If you’re really lucky, it will just be empty space. But chances are pretty good that you’ll see wiring, air ducts and/ or plumbing pipes. If you are still intent on removing those soffits, all that “stuff” has to be re-routed and you have officially committed to a major remodeling project. —Kitchen Craftsman

Make no mistake about it, a kitchen soffit removal will generate a whole bunch of junk. What’s more, the replacement process will only add to it. So, be sure to schedule remodeling debris cleanup before you start your project.

Now, as for the kitchen soffit removal, this isn’t necessary something that requires a lot of specialty tools and construction experience, but it does require a good bit of elbow grease. (It also requires a lot of finesse.) Here’s how to do a kitchen soffit removal: When you need remodeling debris removal done for you, just phone 800-433-1094 or visit Pro Junk Dispatch.