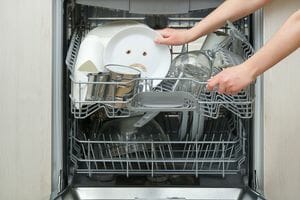 Dishwasher replacement signs range from subtle to obvious. (One common problem is a bad heating element.) So, there’s not always clear cut evidence a dishwasher is going bad. That being said, there are instances when it’s unmistakable. Over time, any major appliance will fail. It’s more a question of when than if, particularly for workhorses like the dishwasher. So, read on to learn more the dishwasher replacement signs to heed.

Simple maintenance will wipe out 90 percent of dishwasher problems. The three common problems are: the dishes don’t come out clean, the dishwasher leaks water, and the dishwasher won’t start. We’ll show you how to make the fixes yourself and save the money you would have paid a repairman. —Family Handyman

If water leaks from the appliance, it’s probably a bad door gasket. That can be replaced to maintain a watertight seal. If the door gasket isn’t the culprit, it might indicate a stuck float switch. The float switch is the mechanism which causes the appliance to drain at a certain water level. Of course, if it’s just simply going bad outright, you’ll need to schedule appliance removal and replace the dishwasher.

Before you start shopping around for a new appliance, ensure the dishwasher is on its last leg. Because a dishwasher, like other major appliances, has several components, there’s often at least one or more dishwasher replacement signs that will tell you it’s going bad: If you need appliance removal for your home in Apple Valley, phone 800-737-5923 or visit Junk Garbage Removal.