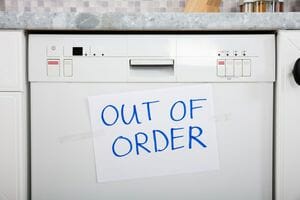 Dishwasher failure signs range from all-too-obvious to subtle. Depending on the age and the make and model, failure signs might be apparent or hard to detect. Although this is a very simple household machine, it’s operation is complex. Meaning, there are several things to look out for if you suspect it’s dying out. Read on to learn about the most common dishwasher failure signs.

Simple maintenance will wipe out 90 percent of dishwasher problems. The three common problems are: the dishes don’t come out clean, the dishwasher leaks water, and the dishwasher won’t start. We’ll show you how to make the fixes yourself and save the money you would have paid a repairman. —Family Handyman

If water leaks from the appliance, it’s probably a bad door gasket. That can be replaced to maintain a watertight seal. If the door gasket isn’t the culprit, it might indicate a stuck float switch. The float switch is the mechanism which causes the appliance to drain at a certain water level. Of course, if it’s just simply going bad outright, you’ll need to schedule appliance removal and replace the dishwasher.

Before you start shopping around for a new appliance, ensure the dishwasher is on its last leg. Because a dishwasher, like other major appliances, has several components, there’s often at least one or more telltale signs it’s going bad. Here are the most common dishwasher failure signs: If you need appliance removal for you home, business, rental property or elsewhere in San Jose, just phone 408-722-9316 or visit Junk Garbage Removal.