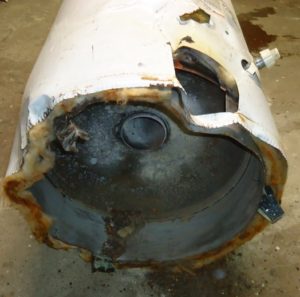 A failing water heater presents people with a real dilemma. It's not exactly an inexpensive major appliance to replace and it usually requires an experienced plumber to install it. But, those aren't the only problems. A bad water heater is problematic to dispose of, to say the least. This is because it contains hazardous materials. So, the local trash collection agency probably won't take it, even if you manage to get it out on the curb. But, how do you know when it's a failing water heater or just needs a simple repair?

If you're refinishing your basement, you might consider replacing the water heater just to handle the extra load. (That is, if you're going to install another bathroom or mini kitchen.) One common failure are the heating coils. Much like those in the oven, the heating coils heat water in the tank to a pre-set temperature. Even though the average lifespan of a water heater ranges between 10 and 15 years, according to the International Association of Certified Home Inspectors, the heating coils can go bad before the appliance reaches its end of life.

Hot water on tap is one of great conveniences of modern society. In the 1800’s if you wanted a hot bath you had to warm water on a wood burning stove or over a fireplace, make multiple trips to the tub and then hope it doesn’t cool too much before you jump in. Today we just turn on the faucet and enjoy. But if your water heater is failing that bath you planned may not go so well. --Home Depot.com

A bad water heater might not give many overt signs it's actually dying. But, unlike other appliances, because this only serves one single purpose, it's generally not difficult to tell. The problem for some homeowners, is certain appliances fail at the worst time. For instance, you might be tasked with hosting an estate sale. And, then sell the house itself. The property is less attractive when it comes with repairs. Whatever the case, here are the most common failing water heater signs to look for:

Of course, one of the most obvious signs is little to no hot water. If it’s time for a water heater removal, just give us a call at phone 800-433-1094 or visit Pro Junk Dispatch. We’ll be happy to take it off your hands, along with any other junk removal you need.